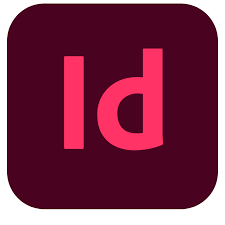 Adobe InDesign is a software application produced by Adobe Systems. This software can be used to create works such as posters, flyers, brochures, magazines, newspapers and books.
InDesign is actually the successor to Adobe PageMaker, which was acquired with the purchase of Aldus in late 1994. By 1998 PageMaker had lost almost the entire professional market to QuarkXPress, the relatively feature-rich 3.3 released in 1992, and 4.0, released in 1996.
Quark stated its intention to buy Adobe and to divest the combined company PageMaker to avoid mistrust issues. Adobe turned down the offer and instead continued working on a new application for page layout. This project has been started by Aldus and is code-named “Shuksan”. It was later codenamed “K2” and released as InDesign 1.0 in 1999.
In 2002, InDesign Mac OS X made its first appearance as desktop publishing (DTP) software. In version 3 (InDesign CS) it received a boost in distribution by being bundled with Photoshop, Illustrator, and Acrobat in the Creative Suite.
InDesign exports Adobe Portable Document Format (PDF) documents and has multilingual support. It is the first DTP application that supports Unicode for text processing, advanced typography with OpenType fonts, advanced transparency features, layout styles, optical margin alignment, and cross-platform scripting using JavaScript.
The following versions of the software introduce new file formats. To support new features, especially typography. It was introduced with InDesign CS, both the program and the document format are not backwards-compatible.
In contrast, InDesign CS2 does not support XML-based document representation. InDesign CS version 3.1 updated with April 2005 update can read InDesign CS2-saved files exported to Inx format. The InDesign Interchange Format does not support earlier versions of InDesign CS.
Adobe InDesign CS3 was developed as Intel compatible universal binary software and in 2007, it became the original Power PC Mac machine.
In addition to being used to design print media, recently InDesign can also publish content suitable for tablet devices together with the Adobe Digital Publishing Suite.