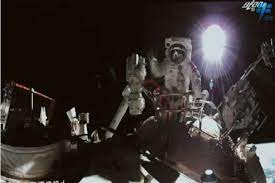 Tiangong—which means “heavenly palace”—is the latest milestone in China’s quest to become the world’s leading space power, having landed a rover on Mars and sent a probe to the Moon.

Its core module entered orbit earlier this year, with the Tiangong space station expected to be operational by 2022.

Wang and colleagues; Zhai Zhigang, stepped out of the module on Sunday night—waved at the camera while tethered to the outside of the station—and installed the suspension device and transfer connector.

“This marks the Shenzhou-13 crew’s first extravehicular activity, and also the first in China’s space history to involve the participation of female astronauts,” the China Manned Space Agency (CMSA) said in a statement.

“The whole process was smooth and successful,” the agency said. CMSA declared its mission complete.

Tiangong is expected to be operational for at least 10 years, and the three astronauts are the second group to stay there. Wang was the first woman to visit.

Mission commander Zhai Zhigang is a former fighter pilot who made China’s first spacewalk in 2008.

Ye, who stayed inside during the mission to support his comrades, is a Chinese People’s Liberation Army (PLA) pilot.

Their work involves setting up testing equipment and technology for future construction, with at least one more space trip planned.

The team is expected to spend six months on the space station.

The previous record-breaking crew, which carried out the first mission to Tiangong, returned to Earth in September after spending three months there.

An astronaut named Wang Yaping became the first woman from China who managed to get out of the core module to complete a mission to outer space.

In carrying out its mission, Yipang, assisted by Zhai Zhigang and Ye Guangfu, who are members of the Shenzhou-13 crew, departed for China’s new Space Station in Tiangong since October 15.

According to the Global Times reported by CNN, during his exit from the core module into space travel, Yaping was in charge of installing equipment and testing connectors to the station’s robotic arm.

They also tested the safety of supporting equipment, including China’s domestically produced spacesuits.

Shortly after stepping out of the space station cabin on Sunday (7/11), Yaping waved to the audience on Earth and said he was feeling great as captured in a video released by the flight control center that eventually went viral on Chinese social media.

Yaping is the second Chinese woman to be in space, after Liu Yang made history by joining the Shenzhou-9 spacecraft in 2012. However Yang doesn’t come out of the core module.

“When I looked out the window for the first time, I realized the true meaning of the power of life. Such beauty is beyond comprehension,” Wang said in an interview with CNN in 2015 when he recounted the first time he saw Earth from space.

Before Wang, only 15 women worldwide had spaced out since 1984.

Soviet astronaut Svetlana Savitskaya was the first to do so and so far most of the female space explorers have been American NASA astronauts.

“Female space explorers are an integral part of manned space and Wang has left her mark in history thanks to her bravery,” Yang Yuguang, Deputy Chair of the Space Transport Committee for the International Federation of Astronautics, told the Global Times.