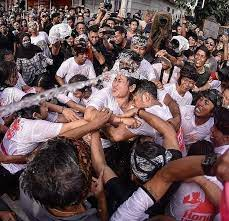 Indonesia is known for its rich customs. Each of the indigenous peoples has unique traditions, all of which look interesting to some that feel terrible.

According to the Central Statistics Agency, there are about 100 indigenous tribes in Indonesia. Here are some unique traditions that still exist today.

The Ma’nene tradition is a way for the Toraja people to respect their ancestors. According to them, their spirit never leaves the family. Therefore, they have a tradition of dressing and changing clothes to take home. Ma’nene is usually done after the big harvest in August. However, there are also those who do it in September, at least three times a year.

Kebo-keboan was held to invoke the fertility of the fields and abundant harvests. This tradition is carried out by the people of Banyuwangi, especially the Osing Tribe. Every year, you can see Kebo-keboan in Alasmalang and Aliyan villages on 10 Muharram or Suro. The event begins by parading people who are possessed by supernatural spirits to be taken to the Kebo-keboan Cultural House. Finally, there will be the Goddess of Fertility and Dewi Sri who sow rice seeds to the farmers and kebo.

Omed-omedan is a youth tradition of Banjar Kaja, Pakraman Sesetan Village, Denpasar, in welcoming the turn of the Caka New Year. This event has been carried out since the 18th century AD. Omed-omedan is not a kissing tradition as seen on social media, but mutual attraction. This tradition can only be carried out by new members entering college until those who are not married. Those who are unable to participate are prohibited.

The Dani tribe in the Baliem Valley, Papua, has a fairly extreme way of expressing their sadness. When a family member or relative dies, they will cut off their finger. This is done to prevent the catastrophe that caused the loss of life to happen again. Ikipalin is carried out using sharp objects, such as knives, axes, machetes, or others. Fortunately, along with the opening of the Dani Tribe, now many people are leaving it.

Like Debus, those of you who are not used to it will be horrified to see the Tatung tradition in Singkawang. In enlivening Cap Go Meh Singkawang, there are hundreds of people who carry out this tradition. Tatung itself means the spirit of a god from the Hakka language. In maintaining their magic, they are required to perform several rituals. One of them is fasting from eating meat on the first and 15th of every month in the Chinese calendar.

The Chinese descendants in Bagan Readyiapi, Riau, have a special tradition every June called Bakar Tongkang. Initially, this tradition became a form of desperation for the Chinese community to settle in an area. Over time, this tradition became a reminder for the people of Bagan Readyiapi not to forget their hometown. This ritual is held by making a sailing ship which will later be burned.

Previously, the temple in the vicinity performed a spirit summoning ceremony. After that, the spirit will be inserted into the person who is willing to become the medium.

Pasola continues to develop into a hereditary tradition for the people of Wanokaka District, West Sumba Regency, East Nusa Tenggara. This event is a game of dexterity throwing a wooden javelin while riding a horse. Pasola is held to welcome the planting season. In ancient times, they believed that an accident during an event would be a good sign for agricultural produce. Until now, they still fight during Pasola in order to maintain ancestral traditions.

Tana Toraja does have many unique traditions, especially those related to death. For them, Rambu Solo becomes a ritual that must be done when someone dies. If it is not done, they believe that the spirit will bring misfortune to the person left behind. Before the ritual begins, the deceased will only be considered sick. They will take care of him by giving offerings, such as food, drinks, cigarettes, betel nut, or others. Usually, Rambu Solo will be held in July and August.

The Mentawai tribe has a tradition of tattooing their bodies called Titi. Tattooing the body there is not as easy as most in big cities. The preparations take months. They will hold a ceremonial ritual led by a traditional shaman. Next, the host must hold a party by slaughtering pigs and chickens. The tattoo motif is also not arbitrary, because its function is the identity and identity of the Mentawai Tribe. They do it traditionally by piercing with a wooden-stemmed needle. The needles are made of animal bones or karai wood tapered karai.

Not far from the modern city, the Inner Baduy tribe still maintains its tradition of walking without a vehicle. In fact, every year, they have a Seba tradition. The tradition of walking from Rangkasbitung as far as 100 kilometers to stay in touch. On May 4-6, Seba was held by meeting several regional heads. At each meeting, the adat stakeholders will convey important messages.

Those are 10 unique traditions in Indonesia that we should know. Don’t forget to get to know the traditional traditions of each region when you go on vacation there. Happy World Indigenous Peoples Day!