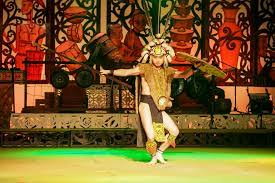 The tribe, which originally came from Kalimantan, lives in groups and lives in the interior, in the mountains, and so on.

According to J. U. Lontaan, the Dayak tribe is further divided into approximately 405 sub. And each sub-tribe has customs and cultures that are not much different.

One of the cultures of the Dayak tribe that is still maintained and preserved is the Ajat Temuai Datai Dance.

This traditional dance is adopted from the Dayak Mualang language, which is one of the sub-ethnic groups of the Iban Dayak.

In terms of meaning, Ajat Temuai Datai cannot be interpreted word for word. However, the Mualang Dayak people make this dance a welcoming dance.

In West Kalimantan itself, the Ajat Temuai Datai dance is a dance to welcome state guests.

And it is usually shown when tourists visit the Mualang Dayak village in West Kalimantan.

However, in the past, the Ajat Temuai Datai Dance was considered a sacred dance. Precisely in the Mualang Dayak village, this dance is only a performance for the Great Guest, namely the heroes who have returned from the battlefield.

Because, in the past war was a custom of the Mualang Dayak. They do it on the basis of a power struggle.

They are considered heroes if they are able to bring home the head of the enemy. For them, the decapitation of a human head is a testament to victory.

Because it is believed, the enemy’s head can make the soul force of the winner and guard the entire Mualang Dayak Tribe.

And as an expression of joy, they held a welcoming ceremony with the Ajat Temuai Datai Dance.

Until now, in Mualang Dayak Village there are customary rules that apply. Such as immigrants who are not approved to enter the Mualang Dayak village before attending the Ajat Temuai Datai ceremony.

And not only that, this tradition also applies to Dayak Mualang residents who have finished fighting.

The typical Dayak cry that started the Ajat Temuai Datai dance was “Nyelaing”. Reportedly, every scream from the dancers has a meaning.

Like shouting seven times means the hero succeeded and won to bring home the opponent’s head.

And if the shout is only three times, the Dayak Mualang hero gains victory and takes the enemy’s head, but on his side there are victims.

Starting from the first entrance of the Mualang Dayak village to the front yard of the long house, the dancers will accompany guests on their journey.

The long house in the village was used as the home of the Mualang Dayak chief.

Getting to Know the Ajat Temuai Datai Dance Movement

This part is the process of guests or guest integration arriving in front of the Panjai House or a long house on stilts.

This process is done by dancing. After going through the offering ceremony to the petara.

then prepare the conditions for the traditional ceremony behind the bait (bamboo spread), and read a mantra or message as a condition for inviting the Senggalang (sacred bird that will give a message to God Almighty).

then this process is carried out continuously while guiding guests to the next place.

The bamboo was deliberately spread to cover the entrance to the longhouse and the guests had to slash the saber.

It is symbolized as being free from obstacles that hinder the guest’s journey.

Step on the Rock

This process hits the heel when it hits a stone immersed in prepared water.

This is symbolized as the strong determination and high dignity of the guest as a respected hero.

Then, the water in the stone bath is dripped on the guest’s head as a symbol of the strength and strength of the spirit for the welcomed guest or the hero to be emulated.

This process is the process of entering the long house. This is also the final process of the welcoming process.

After the previous process is complete, guests are allowed to go up to the longhouse to purify themselves in a ceremony called Starting the Bird or restoring the spirit of war or casting out evil spirits.