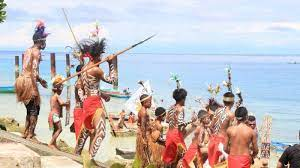 Tribe Breed has been known since the first in its ability to explore the ocean. This is indicated by the existence of the descendants of the tribe of Biak to various areas in Papua and outside Papua scattered in Maluku, Raja Ampat and along the coastal areas of Papua, even in Makassar. The distribution of the Tribe Breed is powered by the greatness of their ancestors in the roam of the ocean, in this case cannot be separated from the used boat.

Suku Biak able to make boats of various sizes and shapes according to its usefulness. One of the types of used boats is a boat called the Wai Mansusu. Boats are known as Mansusu this is the identity of Biak people, because it has been used as a boat to go to war since the 15th century. The word “Mansusu” means forward and backward. This is interpreted by the fathers as the ability to confront enemies from all directions.

This boat is a boat load, but also can be used as boat war inter-regional and inter-island. The hallmark of this boat is the shape of the face and the back of the boat the same. The bow and the stern of the boat Mansusu was deliberately made to be the same shape and appearance. This is not without purpose, as the name implies, this boat is made thus to easily move forward and backward easily.

Because the bow and stern shaped the same, Mansusu can be driven to the two-way, front or back, so that when there is war or pressed in the battlefield, the rowers do not bother to rotate the boat to leave the battlefield, they simply turn around and paddle backwards that boat. Because of its flexibility, it Mansusu appropriate for use in warfare in the past.

Another hallmark of the boat Mansusu is large in size according to function and is able to transport up to 40 people boater Boat is equipped with outriggers, screen, rum and Kamboi Daum, namely the backrest to the rowers. For the size of the boat depending on the needs, but generally sized 6-12 meters.

According to the old customs of society Breed on the coast, this boat used to reach the location of the war. Earlier, in the village they held wor mamun or the song of war by a group of citizens. Wor mamun own performed with the dance and percussion tifa, traditional musical instruments of Papua. Not long ago, indigenous elders give direction. The war must be faced bravely.

Wor mamun this is actually the song to rekindle the fighting spirit. Poem-poem also contains support and moral message that is not even afraid to face the opponent. Spirit fighting constantly voiced throughout the wor mamun sung. Before leaving, indigenous elders or warlords will give the sermon. Do not fracture. Prepare our spirit, our physical and our boat to go to war.