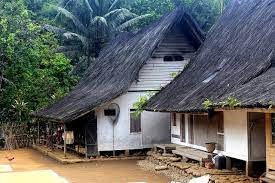 The traditional house of West Java became one of the cultural richness of Indonesia. Custom home to be a staple of a culture that is almost owned by every tribe in the Land of Water.

The traditional house of West Java has the characteristic of simplicity, use of natural roofing materials, to have a close bond with the nature around. Rumah adat Jawa Barat basically adopted the life of the lehuhur who have a harmonious relationship with nature.

All models custom home in West Java at first glance seem similar. However, everything has its distinctive features and its significance respectively. Curious as to what? The following coil summarize the traditional house of West Java.

Imah Rhino has a meaning rhino evaporate. Name Badak Heuay not without reason, because the naming is derived from the shape of the roof of a house that resembles a rhino is being evaporated, which is divided into two rooftop terrace large and small.

The roof that resembles a rhino that serves to protect the patio area in front of the house. In ancient times, a terrace furnished with wooden chairs is usually used to receive male guests.

Just like Imah Badak Heuay, the naming of the traditional house of West Java is used, because of the design of the roof of the main resembling a dog that was sitting. Tagog Dog has the shape of the roof there are two fields and bordering on the line of the stem suhunan.

The field of the roof of the first in a custom home Tagog it has the size of the roof which is wider than the other roof. It caused such a roof to cover the room in the custom house. Traditional house Sundanese Tagog Dogs are usually encountered in the area of Garut Regency.

Jolopong is a Sundanese term that has meaning lying straight. The name was given to this custom home because the design of the Jolopong made very simple as lying just like that.

This custom home has another name called suhunan long or suhunan Jolopong. The simplicity of the traditional house Jolopong also be seen from the shape is not complicated in the absence of curvature varied.

The form of the traditional house Jolopong be the one that was old enough when seen from the shape of the roof of the hut building or hut. This custom home has only two areas of the roof that are separated by a line suhunan in the central part of the house.

For the division of his office, Customs House Jolopong is divided into five parts, namely terrace, a living room, bedroom, and kitchen. The patio Area is also called the porch, the living room is called with imah, which means the main part of the house, the bedroom is called with the pangkeng, and the kitchen is called pawon. Jolopong usually found in Sumedang District and Garut, Jawa Barat.

The name of the Traditional House of Sundanese is taken from the word ‘mt’ which means the boat and ‘kumureb’ which means on his stomach. The name is taken because of its shape that resembles an upturned boat with a roof designed pyramid-shaped.

If seen from the design house, Custom House Parahu Kumureb have the architectural style that is more complicated than Traditional House Jolopong. This custom home has four main sections which are divided into two areas with different shapes.

The Area of the front side and the rear of the house designed with a trapezoidal shape, while the area of the back is created with the shape of an equilateral triangle. Although the design of this house is unique, Imah Boat Kumereb become one of the custom home minimal demand of modern society.

Rumah adat Jawa Barat Imah Julang Ngapak have a roof that was inspired from the birds, in which the shape resembles the bird which is the flapping of its wings. The top on the traditional house of West Java is triangular in shape and its lower part is widened.

However, in modern times, the roof of the customs house in West Java there is a material coated with wood. Rumah adat Jawa Barat Imah Julang Ngapak you can meet in the area of Tasikmalaya.